The Hermitage has its origins in 1616, when the margrave purchased a tract of forest not far from Bayreuth. Half a century later, Margrave Christian Ernst turned part of it into a deer park and shortly afterwards added a "grotto and fountain house". 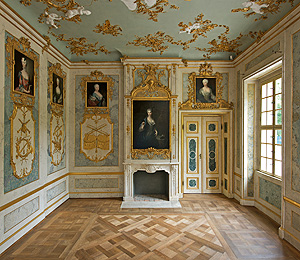 Finally Margrave Georg Wilhelm (reigned 1712-1726) built a palace in this remote forest, which was surrounded on three sides by the Roter Main river. It is more than likely that, as the patron, the margrave had a say in the planning of this striking, coherently designed complex, conceived as the "court hermitage".

Here the margravial court imitated the "simple life" and the regulations of a hermit order, of which the margrave himself was the superior. The courtiers dressed in monk's habits, slept in tiny bare cells and ate food prepared for them by the ladies of the court from brown earthenware bowls using wooden spoons.

Two months after he took over the government, Margrave Friedrich (reigned 1735-1763) presented the entire complex to his wife for her birthday on 3 July 1735. Wilhelmine immediately set about redesigning it, and in the years which followed the palace was rebuilt and the rooms magnificently appointed, without however destroying the original, grotto-like character of the building. A few years later the New Palace was built. Further garden areas and various architectural features were also added to the park.